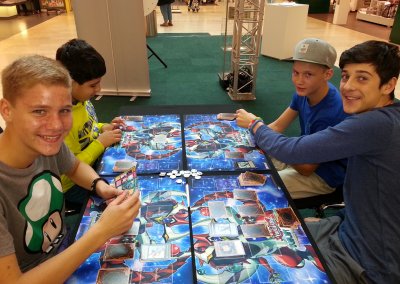 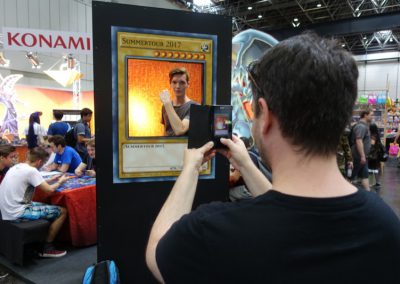 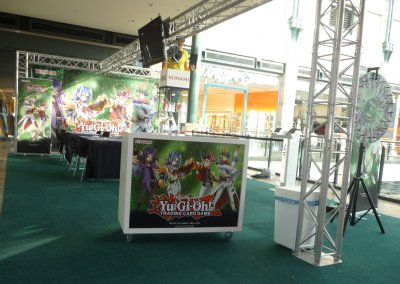 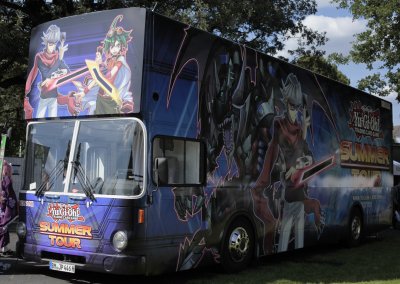 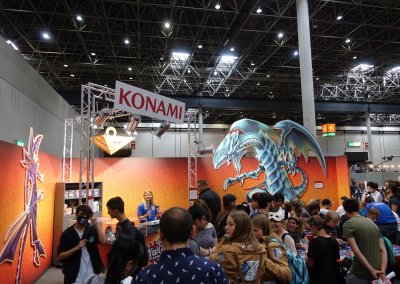 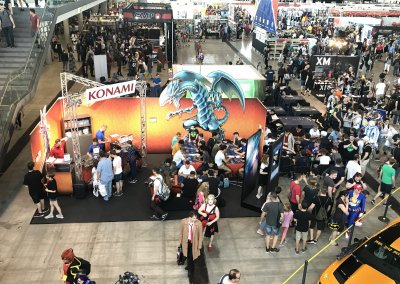 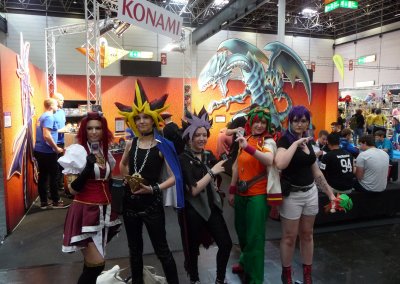 For our client Konami we organize a whole range of different events. From sampling campaigns to trade fair appearances to promotional tours, we ensure a convincing performance.

We want to reach the kids exactly in their prefered environment. Since 2014 we drive across Germany with Yu-Gi-Oh! to make the game even better known. To do so, we always come up with something new and test various opportunities for promotion to find the best ones. Our “Mall Tour” with 14 stops in large shopping centers in Germany was a great success, but we wanted to attract even more attention in the following year. With a branded, huge double-decker bus, we were the highlight on Germany’s roads in 2015. In addition to a demonstration of the trading card game, the new video game could also be tested on two Playstations. The following year, our vehicle was a bit smaller, but our branded Step Van convinced the audience with a large sales counter. This way the kids were able to get the latest products on-site and experienced players could enhance their deck with new technology. For the first time on a Yu-Gi-Oh! Tour visitors could also take part in official tournaments. With our vehicles we stopped at theme parks, zoos, seaside resorts and manga conventions.

In order to be less dependent on the weather and to be able to focus even more precisely on the target audience, we relocated the Summer Tour to the major anime, comic and manga conventions in Germany and Austria from 2017 onwards.

For this purpose, JOKMOK developed a booth together with the fair builder Meyer-Ebrecht, which had a great look, but could also be assembled quickly by our four-member promoter team from Bremen.

During the tour, newcomers can get a demonstration of the game and Yu-Gi-Oh! players can learn all about the newly introduced rules. Furthermore, the latest products were available in the shop and players enjoyed playing in small and large tournaments. As a special highlight, there is a free photo box, in which the visitors of the events can have their picture taken to become a character on a Yu-Gi-Oh! card themselves. Since the introduction of the mobile game “Duel Links” we have exchanged the photo box for a “Duel Links”-tower, where the game is ready to be tested on two oversized “mobile phones”.

Since 2018 we have supplemented the “big tour” with a “little tour”, for which we are using a lightweight booth system with only 2 promoters to reach as many fairs and conventions as possible.

In addition to the tours, we support Konami in implementing in-store promotion to introduce new products.

10 teams drove all over Germany for four consecutive weekends to promote the new format in the Yu-Gi-Oh! TRADING CARD GAME. In about 50 Müller branches, interested parties were given the opportunity to get to know the decks and the new game concept. Exploring new possibilities, and meeting like-minded players was the motto – with our trained promoters available to help actively.

In the spring of 2017 we created a nationwide sampling campaign in a total of 10 cinemas for the release of the movie “Yu-Gi-Oh! – The Dark Side of Dimensions”. In addition to small packs of cards, visitors were given discount coupons and information leaflets about Yu-Gi-Oh!. We coordinated the shipment of sampling and branding materials, research, employment and accounting of the staff as well as the communication with the cinemas.

Furthermore, in the summer of 2017 Yu-Gi-Oh! introduced the new “Link Summon” game mechanic. We carried out a promotional campaign over 4 days in 20 participating Yu-Gi-Oh! Tournament stores, which was mainly aimed at existing players, but of course also at the acquisition of new customers. JOKMOK was responsible for the coordination of the staff and the agreements with the stores.

Are you planning a similar event / action? 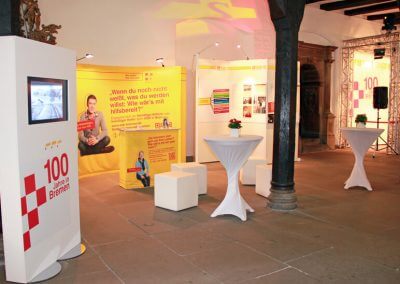 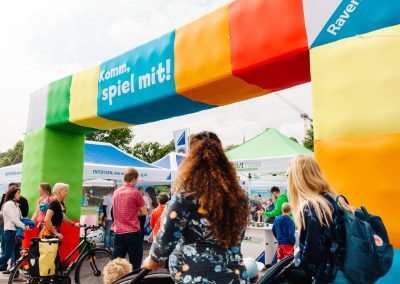 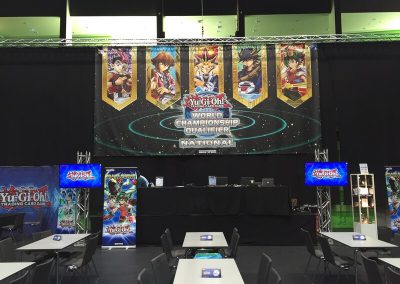 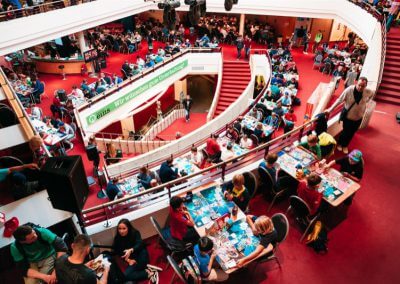